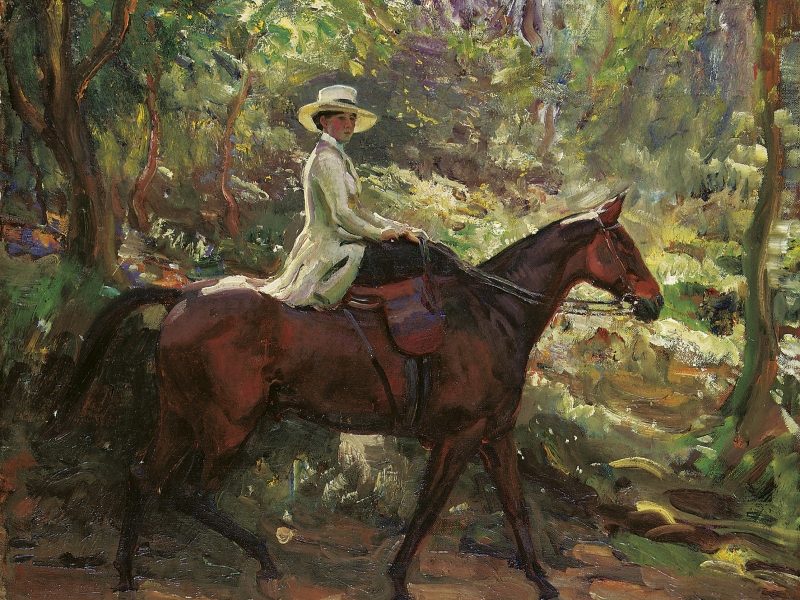 The moving story of the celebrated artist Alfred Munningsâ™s first wife, Florence, first brought to the publicâ™s attention by novelist Jonathan Smith, has now been made into a major new feature film starring Dan Stevens and Dominic Cooper (Metrodome Films). The beautiful Florence Carter-Wood met the charismatic artist Alfred Munnings when she came to Newlyn to study at Stanhope Forbesâ™s School of Painting. The couple married in 1912, but their marriage proved disastrous, with delicate Florence seeking solace in the company of gentlemanly Gilbert Evans, the Lamorna Valley land agent.

This exhibition brings together paintings by the artists working in Newlyn and around the Lamorna Valley at that time, giving depth to the story and putting it in context with the lives and work of the main protagonistsâ™ circle. It includes poignant memorabilia, such as Gilbert Evansâ™s personal diaries on which the story of the book and film are based. There are also photographs of the real-life characters, which vividly portray the artistsâ™ lives in pre-WW1 Cornwall.

Florence was a much-loved member of the artistsâ™ circle and she modelled for Laura and Harold Knight as well as Munnings. Several of the paintings of her are included in the exhibition, one of which is The Morning Ride, a stunning portrait by Munnings of his wife on horseback which the artist gave to his friend and rival Evans: this was the painting used as the book cover image.

The exhibition also includes major works by and of fellow Newlyn and Lamorna artists, including Dame Laura Knightâ™s iconic Self Portrait and Nude aka The Model on loan from the National Portrait Gallery, for which the model in question was Ella Naper, another member of the close-knit clique. A rare example of Florenceâ™s own painting is among the exhibits, as well as works by her fellow Forbes students such as Frank Gascoigne Heath, Dod Procter, Garnet Wolseley, Richard Copeland Weatherby and Jill and Geoffrey Garnier.