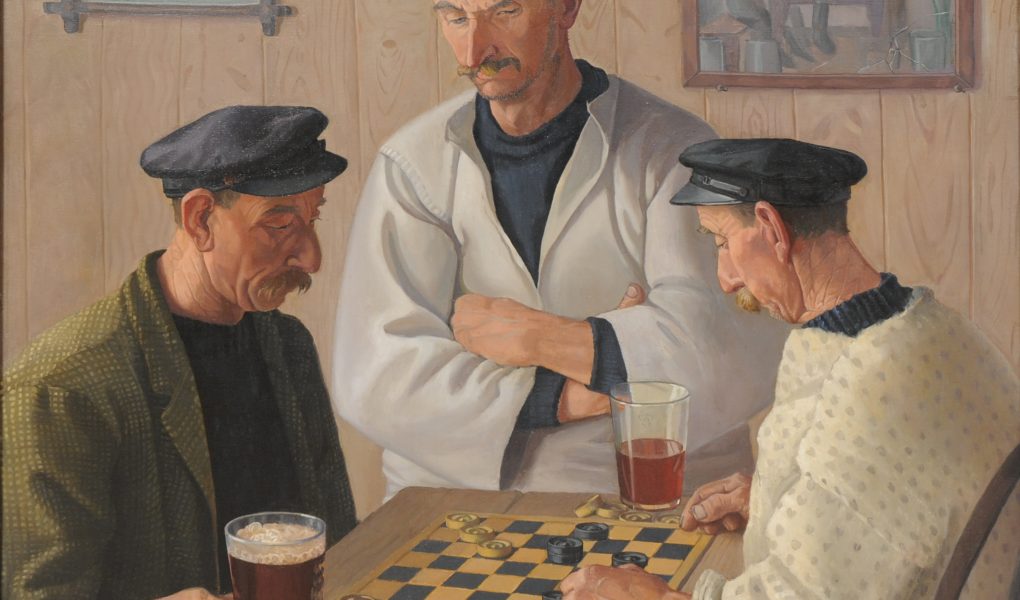 An exhibition of paintings by a once world famous child prodigy artist, Joan Manning Sanders, whose work had not seen the light of day for many decades.

Joan’s story is truly remarkable. Born in 1913 to bohemian, creatively talented parents and raised surrounded by the celebrated Newlyn School artists, it is perhaps unsurprising that an early glimpse of artistic talent was nurtured. She received her first artistic commission from Father Bernard Walke of St Hilary Church when she was only 13 and the six paintings she produced remain on view on the parclose screen in the Church’s Lady Chapel.

This was just the start of Joan’s unparalleled youthful success. Her parents’ friends, including renowned artists such as Dod Procter, Laura Knight and Harold Harvey, admired and respected her work and all gave her encouragement. By the age of 16, she had exhibited several times in London, including taking the – still unsurpassed – record for the youngest painter to have work selected for the Royal Academy summer exhibition. Two hardback books were published about her work, one in the UK and one for the American market, and this, together with widespread media coverage, made her a household name.

Having achieved such triumph in her teens, it seems tragic that her artistic career lasted barely a decade and fame soon faded into utter obscurity. Artistic fashion moved away from Joan’s figurative style and her attempts to mould herself into a more modernist technique were unsuccessful. Paintings that had caused a sensation when first exhibited were consigned to the attic, taken off their stretchers and rolled to save space. Works once purchased for substantial sums by enthusiastic collectors have vanished from record and cannot now be traced. Thus the shining star of Joan the child prodigy vanished from our vision.

In order to stage an exhibition of Joan’s work, Penlee House had the tricky task of obtaining paintings that were fit to be exhibited. Thankfully Joan’s son, John Floyd, had carefully preserved the canvasses his mother had left for the spiders, although years of being rolled and covered in dust made them impossible to show. Two of the canvasses were taken to the renowned Painting Conservation department at the Courtauld Institute in London, where student Harriet Pearson brought them back to life, and another three were taken to conservator Alison Smith in Penzance. Seen for the first time in eight decades, these astonishing works will be accompanied by information about the restoration process.

Also on show was Crafts for Christmas, the annual selling exhibition of work by members of Cornwall Crafts, as well as a selection of Newlyn School paintings curated by pupils of Penpol School in Hayle.

Joan Manning Sanders: A Forgotten Prodigy was sponsored by Barbara Kirk Auctions and ran at Penlee House Gallery & Museum, Penzance, until 14 January. The exhibition was accompanied by a small book about the artist, written by Owen Baker.