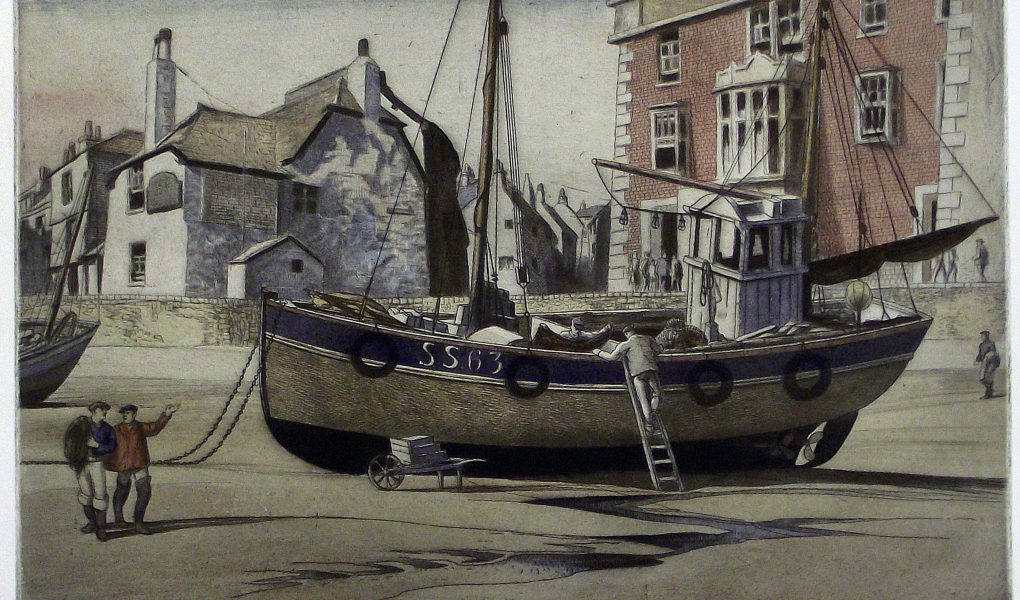 This exhibition uncovers the work of Edward Bouverie Hoyton (1900 â“ 1988), one of the unsung heroes of Twentieth Century printmaking, and a master of his art. In his lifetime he produced and sold thousands of original prints, both at home and abroad, many of which documented the fishing towns and rugged coastal landscape of Cornwall where he lived from 1939 until his death at his home in Newlyn in 1988.

Hoyton was born in Lewisham, London in 1900 and went on to study printmaking at Goldsmiths College of Art alongside Graham Sutherland, Paul Drury, Eric Frazer, Robin Tanner and William Larkins. Collectively known as â˜The Goldsmiths Groupâ™, these young artists helped to revive the art of the master etcher, the craft of original hand-made prints that had been largely overtaken by mechanical, mass-production printing methods. Their inspiration was the Nineteenth Century artist Samuel Palmer (1805 â“ 1881), whose etchings had created a sensation when they were exhibited at the Victoria and Albert Museum in 1926.

While still at Goldsmiths, Bouverie Hoyton entered the prestigious Prix de Rome competition, winning the Rome Scholarship in Engraving at his third attempt in 1926, which led to a three-year period of study at the British School of Rome. Like many of his contemporaries, Bouverie Hoyton turned his hand to graphic design, producing commercial art for companies such as Fortnum and Mason, Standard Cars, Shell Oil, Daimler, Austin Reed and The Radio Times. The turning point in his career came in 1934 when he was appointed as a lecturer at Leeds College of Art, teaching printmaking and art history. It was at Leeds that he met his future second wife Inez, also an artist.

In 1941, the Hoytons moved to Penzance on Edwardâ™s appointment as Principal at the Penzance School of Art on Morrab Road, a building it had occupied since 1870. Outside of teaching he also found time to renew his acquaintance with Barbara Hepworth in St Ives, whom he had met while she was in Rome with her first husband John Skeaping. Now with Ben Nicholson, Hepworth introduced the Hoytons to her circle of friends, which included artists Naum Gabo and John Wells. In 1942, Wells, who at that time was a practising doctor in St Maryâ™s on the Isles of Scilly, invited Edward Bouverie Hoyton to stay. Shortly afterwards, possibly inspired by his friends in St Ives and the uniqueness of the Scilly landscape, Hoyton experimented with abstraction, creating an extraordinary series of geometric landscapes that border on the Surreal. In later years, he distanced himself from this stylistic aberration, claiming that it was done simply â˜to prove to myself how easy it wasâ™, and, by the 1950s, his work had returned to more representational landscape etchings.

Following his retirement in 1965, Hoyton dedicated his time completely to printmaking and to developing a market for his work. Among other projects, he produced illustrations for the Holmanâ™s of Camborne calendar which was distributed around the world, and by the 1970s and 80s there was an increased demand for his etchings, especially among North American print collectors. From 1965 until 1981 he was Chairman of the St Ives Society of Artists, with whom he exhibited often, and he was a regular exhibitor at the Royal Academy, London. His last ever exhibition was held at the New Gallery in St Ives in 1987; he died the following year, bringing to an end a distinguished and prolific career. This exhibition includes a selection of work from the Edward Bouverie Hoyton Archive at Aberystwyth University, alongside loans from private collectors and works from Penlee’s own collection.