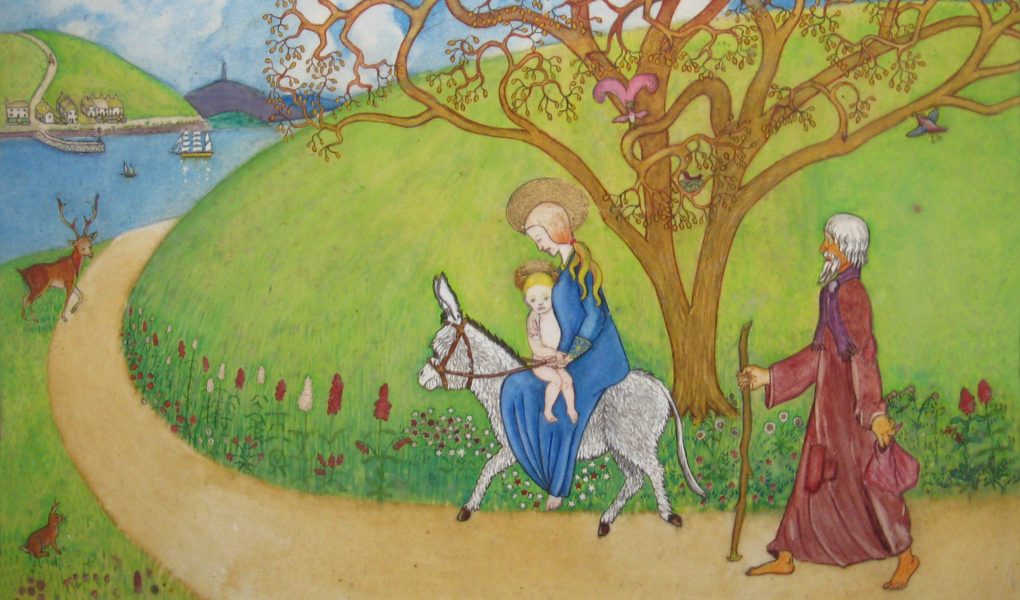 United by a shared love for Cornwall and individual, charmingly naÃ¯ve modes of expression, the three exhibited together several times during their lifetimes, but this is the first time their works have been shown together since their deaths. More-or-less exact contemporaries, all three died within 18 months of one another â“ Pearce, the shortest lived, in January 2007 aged 77; Gillchrest almost exactly a year later, in her 90th year, and Yates in July 2008, aged 85. All three found particular inspiration from West Cornwall and the show concentrates on this aspect of their work, covering subjects such as Mousehole, St Ives, Penzance and St Michaelâ™s Mount.

Of the three, Pearce was the only native Cornishman, being born and spending his entire life in St Ives. Although Gillchrest was born in Berkshire and Yates â“ like L.S. Lowry, to whom his work is often likened â“ in Manchester, they both fell under the spell of West Cornwall and lived on the Penwith peninsula for significant periods â“ in Gillchrestâ™s case, in her beloved Mousehole for most of her life. Consequently, there is much overlap in subject matter for all three painters, and all are remembered locally with great personal affection, as well as being much-loved for their art.

â˜Different Ways of Seeingâ™ has been curated by Penlee House in partnership with representatives of each of the artists. In the case of Joan Gillchrest, this was the Wren Gallery, Burford, with the assistance of Joanâ™s family; for Bryan Pearce, it was the artistâ™s estate, assisted by Janet Axten, and for Fred Yates, it was the John Martin Gallery, London. As usual for Penlee Houseâ™s exhibitions, the show includes paintings from public and private collections throughout the UK, and this show also includes a number of works on loan from the Royal Cornwall Museum from their extensive Bryan Pearce bequest.About the artists in ‘Different Ways of Seeing’:

Bryan Pearce was born in St Ives, Cornwall, in 1929, a sufferer of the then unknown condition Phenylketonuria, which affects the normal development of the brain. Encouraged by his mother who was herself a painter, and then by other St Ives artists, he began drawing and painting in watercolours in 1953. From 1953 to 1957 he attended St Ives School of Painting under Leonard Fuller.

In 1957, Pearce began painting in oils and started to exhibit regularly at the Penwith Gallery in St Ives. He became an Associate of the Penwith Society of Arts in Cornwall, and later a full member, having been sponsored by the sculptor Denis Mitchell. He was also a member of the Newlyn Society of Artists; it was at the instigation of Peter Lanyon that he had his first solo show at Newlyn Gallery in 1959.

Regarded as one of the country’s foremost naive painters, Pearce was well know for portraying the local St Ives landscape and still-life compositions in oil, conte, pen and ink, and pencil. In the early 1970s, he began to make small etchings with the assistance of fellow artists Breon O’Casey and Bryan Ingham, and later Roy Walker. Since 1976 a number of his oil paintings have been made into limited edition screenprints in order to bring his distinctive images to a wider public.
He always worked slowly, but consistently, producing perhaps twelve oil paintings a year. Often compared to Alfred Wallis, the late Peter Lanyon has said of him: “Because his sources are not seen with a passive eye, but are truly happenings, his painting is original.” Public Collections holding his work include the Tate Gallery, the Arts Council, the Contemporary Arts Society and Kettle’s Yard, Cambridge.

Joan Linda Gilbert Scott was born in 1918 at Bentinck Street, London, W1 to Dr Sebastian and Alice Gilbert Scott. After schooling at Rosemead School; Upper Chine School, Isle of Wight, and Wadhurst Boarding School, in 1934 she travelled to Paris to learn the language and develop her appreciation of art. While in Paris, she met Gwen John in her studio.

From 1935-1939, she studied at the Grosvenor School of Art, and exhibited her work at the Royal Academy, New English Art Club and the London Group. At the outbreak of the Second World War, she volunteered as an ambulance driver for the Westminster Hospital.

In 1942, Joan married Samuel Gillchrest and the following year their daughter, Marguerite, was born, followed in 1947 by son Paul. Sadly, they divorced in 1953, prompting Joan to take up modelling for leading London fashion houses in order to earn a living and support her painting.

After moving to Tite Street, Chelsea, in 1955, she met the artist Adrian Ryan. The couple moved to Cornwall in 1958 and Joan bought a cottage in Mousehole. In 1965, Joan and Adrian split up; Adrian returned to London leaving Joan free to paint and she was soon exhibiting her work at local galleries in Mousehole, Penzance, St. Ives, leading to a first solo show at Plymouth Art Gallery in 1969.

Joanâ™s career developed over the next decade and she took part in many mixed and solo shows including, New Ashgate Gallery, Farnham; Windsor and Eton Fine Art Company Ltd; Leon Suddaby Fine Art; Newlyn Orion, and New Craftsman, St. Ives. In 1990, she held her first exhibition at the Wren Gallery, Burford, where she held annual Solo shows from 1991 until her death in 2008.

Born in 1922, Fred Yates grew up in Urmston, a suburb of Manchester. His career as an insurance clerk was cut short by the outbreak of war and he served in the Grenadier Guards until 1945 when he returned to Manchester as a painter and decorator.

Untutored, but with tremendous self-discipline, Fred began to paint pictures of the rich industrial architecture of Manchester, the red brick terraces and the commotion and humour of street life – a theme that the artist is still concerned with, even in his recent paintings. He subsequently enrolled on a teacher-training course at Bournemouth College of Art and in 1950 won a travelling scholarship to Rome and Florence.

He taught for twenty years battling continuously against artistic sophistication, for him, beauty resided in “simplicity and a child’s mind”. In 1969 Fred gave up teaching and moved to Cornwall to enable him to devote all his energy to painting. While he still painted scenes, remembered from his childhood in Manchester, he also worked on sunnier landscapes, new faces and activities that surrounded him.

His paintings are included in many private and public collections including Brighton and Hove Art Gallery, Liverpool University, the University of Warwick, Torquay Art Gallery and Russell Coates Gallery Bournemouth.